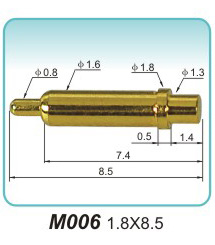 2. It can effectively save PCB board space

Under the same compression, the pogo pin connector will take up less space than the shrapnel connector.