With the continuous development and innovation of electronics industry technology, connectors play an indispensable role in various digital electronic products, and have the function of communication and bridge in the circuit. After the electrical signal is fast, efficient, stable, low loss, high fidelity Transmission to ensure the normal performance of the complete functions of the device. In recent years, due to the continuous development of downstream data communications, computers and peripherals, consumer electronics, automotive batteries and other industries, the global connector market demand has continued to grow, and the overall market scale has continued to expand. Especially the development of the smart phone industry in recent years has promoted the rapid development of pogopin spring thimble connectors! 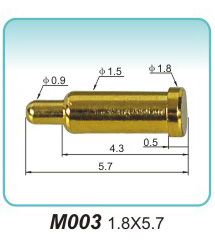 The pogo pin connector has the following advantages:

2. It can effectively save PCB board space

Under the same compression condition, the pogo pin connector takes up less space than the shrapnel connector.